I have been thinking a lot about relative experience.

“Relatively speaking” is a phrase we toss around casually, an improvised rescaling of any given comparison. Hidden in the phrase is an acknowledgement that the scale of comparison has been significantly reduced to include a limited range of possible experiences or perceptions of reality, and that range is defined by a supposedly shared context—both speaker and audience must acknowledge some general truths about the things being compared.  But it can also be a catch all, a brief acknowledgement that the context is not the same from one person to the next, that “the worst day ever!” in one life cannot be appropriately compared to the “worst day ever!” in another.

In my relatively limited (there’s that word again!) understanding of economics, I am able to grasp at least this concept: an apple does not cost the same to everyone who buys it. While the price of the apple may be fixed, the cost of that apple relative to the income of the individual buying it is not. Things can get more complicated when you don’t just compare income (we each make the same amount of money, so the apple should cost the same to both of us) but expenses as well: if we each make the same income, but your rent is higher than mine, that apple will be a greater percentage of your food allowance than it will be of mine. In that way, the apple could relatively cost you more.

This sort of relative cost idea can be translated to experience as well, so that any given experience can cost or benefit any individual relative to the other experiences in their life — everything needs context. A fender bender on a day where everything else is going well most likely won’t be perceived as negatively as if it happened on a day when several things seem to be going wrong. However, the context that a person operates in is not daily, but cumulative: even if nothing else is going wrong today, things have been going wrong all week, all month, all year, for the past decade. Any new experience is measured against previous experiences in order to determine its particular impact, positive or negative.

And yet, “nothing is good or bad, but thinking makes it so.” Without this comparison, any given experience could theoretically stand on its own. It wouldn’t be good or bad, relatively speaking, but simply good or bad, inherently. Or, in what I imagine as Buddhist thinking, neither good nor bad, but simply existing, ideally without impact, without contributing to some greater context, acknowledged and let go. If we could escape our contexts, maybe we could escape relative thinking. In theory, that is how to escape suffering.

Except an apple doesn’t cost the same to everyone. “Expensive” is a relative concept. So is safe, and healthy, and successful, and all the things we end up having to measure for ourselves, individually. I read in Loneliness (Cacioppo and Patrick, 2008) that people even have a biological set point for their need for social connection, varying from one person to another. Even our biology forces relativity on us.

So we seek out contexts similar to our own, or as close as possible. We look for people with similar experiences, similar perspectives, similar measurement scales. This is how I make sense of a world where otherwise nice-seeming people don’t seem to grasp the pain and suffering of others. Their experiences are so far removed from those different than them that they have no reference point of comparison. For example, a white person living in an all-white community may not have had any direct experience with seeing a friend or loved one deal with racism and have trouble believing either that it exists or that it is as systemic as it is. It’s the way that many men don’t seem to get sexism until it impacts their daughters. If we are all stuck comparing everyone else’s experiences to our own, relatively speaking, we all start to think that apples cost the same to everyone, and that other people are just complaining for no reason — or are incapable of understanding the true value of an apple. It takes concerted effort to try to see the world through someone else’s lens, and to understand how their cumulative experiences shape any given moment in their lives, to understand, for example, the anger that seems to come out of nowhere but is for that person the result of the straw that broke the camels back.

Our internal scales can be powerful forces. But we can change those scales, and alter what we measure all of our experiences against; change the thinking, change the comparison, build compassion. In the meantime, if we resize our experiences, as Munroe said, to fit the scales in our head, it might be worth noting that other people have their own scales, too. And that we can’t erase someone else’s experiences just because we have no reference point to compare them to. We’re not all buying the same apples with the same money, and we aren’t all carrying the same straws on our backs. For those of us with privilege, the apples are always going to cost a little less, and we’re going to start off with less straws to carry. For those without relative privilege, apples will always cost more, and their camels have been pre-loaded with burdens.

It really is all relative. And context is everything.

In simple terms, frustration is the feeling of being upset or annoyed, especially because of inability to change or achieve something. Frustration tolerance is the idea that we have a capacity for how much frustration we can tolerate without having some sort of emotional breakdown. 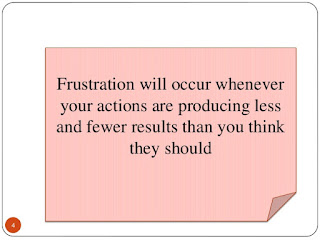 What I try to get my clients to understand is that everyone has limited daily energy. That energy is being used up by all sorts of things. I have people picture a battery — throughout the day, every task they do takes energy from that battery. The lower their battery level, the greater the percentage of what they have left each new task takes. In short, the more you have on your plate, the less energy you have for each thing, and that includes emotional energy. The end result is that your frustration tolerance goes down, and those little things that you might be able to brush off with a full battery — like traffic, rude people, or even dropping your keys — suddenly feel like really big deals because you have so little energy left to deal with them.

Other people use the spoon theory to describe what life is like with chronic illness (physical or mental) or chronic pain — the idea that your battery (or in this case, the number of spoons you have) is already lower than someone else not dealing with that condition: 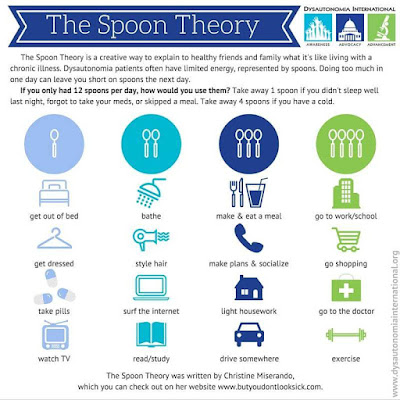 It is important to keep track of your battery/spoon levels. You will need to recharge them — with rest, with time for yourself, with delegating tasks to other people, with turning down obligations. And more importantly, you need to practice self kindness when you start to lost it — snap at your loved ones, get emotional over small things, or feel too drained to do as good a job as you want to. It just means your battery — and your frustration tolerance level — is low.