I am notoriously bad at remembering the source of stories, so I can’t remember where I heard this story first. I have been using it, and telling this particular version of it, for as long as I can remember. This is the version I tell: 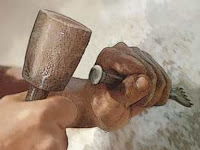 There was a master sculptor and an apprentice sculptor, and one day the Master set a huge block of marble down in front of the Apprentice.

“Apprentice,” he said, “I want you to carve me an elephant.”

“But Master,” said the Apprentice, “I don’t know how to carve an elephant.”

“It’s simple,” the Master replied. “Simply start by carving away everything that is NOT an elephant.”

The moral, I tell people, just in case they have missed it, is that sometimes the best way to figure out what we are is to start by carving away everything we are not.

(When I looked up the story to try to find the origins, I found many versions, several attributed to Michelangelo about carving “David” by carving away everything that was not “David”. In some ways that’s an even more apt analogy than the version I tell, but I’ll stick with mine because I like elephants and not everyone wants to try to carve out themselves as a Greek version of the perfect man.)

I break out this story whenever people talk about mistakes. “Feedback, not failure” was a popular motto at one of my old jobs. Every time we find a way toward a goal that doesn’t work, and every time we carve away some part of ourselves that is “not an elephant”, we get closer and closer to success, and to finding who we really are. Mistakes, for better or for worse, shape us. 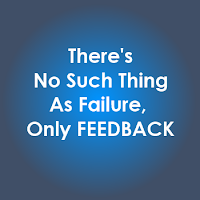 But the truth is, motivation will fail you. If you want to create lasting change, trust structure. If you want to change your life, reshape your day, and build into that day space for the habits that will lead to change. Start with one habit a week — eating breakfast, going to bed an hour earlier, stretching. Keep in mind that your day is already filled with those things you currently think of as bad habits, so you will have to replace an old habit with a new one if you want to actually change. Sleeping instead of more time on social media. Exercise instead of that extra hour of TV a day. If you want to know what changes you actually will be able to make, start with a list of things you are willing to give up in your current routine. Carve away everything that is not part of the kind of day you want to have. Fill the space with your elephant of choice. And be prepared for finding lots and lots of ways that replacing “bad” habits doesn’t work, until you finally find the way that does work (personalized to you).

For the record, none of this is as simple as it seems. Change always seems simple to someone who has mastered it, and terrifyingly difficult to the apprentices just starting out. And it seems like every turn of a new year makes apprentices of us all.